Kiwi fruit is low in calories but rich in nutrients. As stated in the USDA national nutrient database, calories in every 100 g of kiwi fruit weight contains 61 calories. Meanwhile calories in gold kiwi with the same weight, contains 60 calories. A publication that was published in the Journal of the American College of Nutrition shows that, from 27 types of commonly consumed fruits, kiwi has highest nutrient density (nutrient density). The research was conducted by Dr. Paul Lachance, director of The Nutraceuticals Institute, a professor at Rutgers University, USA.
Kiwi is a source of amino acids arginine and glutamate. Arginine is an amino acid that is a vasodilator (blood pressure lowering) and helps increase blood flow. As a vasodilator, arginine is also used to treat symptoms of impotence. The same amino acids also prevent plaque on artery walls, particularly in patients with angioplasty (plastic surgery of blood vessels).
Some research shows that the kiwi fruit contains 17 times more vitamin C than an apple, two times more than oranges, as well as more than lemon. The content of vitamin E in kiwi twice more than the avocado. In addition, kiwi fruit also contains vitamins B1, B2, B6, folic acid, niacin, vitamin A, and pantothenic acid in significant numbers. 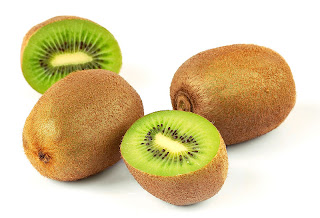 Vitamin C and vitamin E as a natural antioxidant that plays an important role in counteracting free radical attack, causing aging cells and triggers the onset of various diseases. Free radicals are atoms or molecules that has one or more unpaired electrons that are free to bind to various cells and tissues, as well as lead to cancer, heart disease, and premature aging.
Vitamin C helps maintain the condition of the body against flu and colds (boosts the immune system), reducing stress levels and help the healing process. This vitamin also plays a central role in maintaining the health of skin cells that still looks clean, radiant and healthy. As with vitamin C, vitamin E also plays a role maintaining healthy body cells, slow the effects of aging and maintain skin cells in order to stay young, improve fertility, and reduce the risk of coronary heart disease. ( Another benefits read at benefits of kiwi fruit)
In addition to vitamin C and E, another antioxidant present in kiwi is certain phytochemical compounds, such as carotenoids, lutein, Xanthophyll, flavonoids, and others. Kiwi antioxidant capacity against free radical compounds placed third highest after the orange and red wine.
The main minerals contained in the kiwi is potassium, magnesium, calcium, copper, zinc, manganese, and phosphorus. The content of potassium in the kiwi was 5.4 mg / calories, higher than bananas (4.2 mg / calories), and slightly lower than the papaya (6.6 mg / calories) and apricot (6.2 mg / calories). To get more specific kiwi nutritional value, below you can read at the table based on USDA National Nutrient data base.