We often say that soy can be a substitute for meat for those who are classified as vegetarian. Soy is a nutritional storehouse and you can get the health benefits of a soy-based products such as soy milk, tofu, bean sprouts, beans, sauce and flour. Soybeans are kind of nuts that are common in East Asia. They are classified as an oilseed. Soybeans are considered as a complete protein because of the amount of essential amino acids. Benefits of soy found in countries such as China and Japan, where people are less exposed to heart disease, osteoporosis, breast cancer and prostate gland. 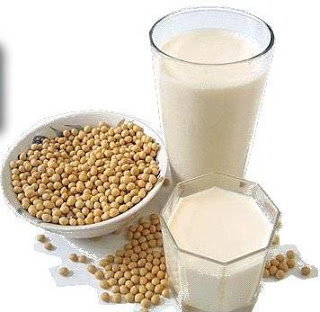 Preventing Prostate Cancer
Soy milk is rich in phytoestrogens, plant hormones that can inhibit the production of testosterone in men. Reduced testosterone levels can significantly reduce the risk of prostate cancer. Research has shown that men who consume soy regularly had lower prostate cancer.
Overcoming Lactose Intolerance
Lactose intolerance is a condition of the digestive system is not able to digest and absorb lactose (milk fat) well due to lack of lactase enzyme in the body that functions to break down lactose into glucose and galactose (monosaccharides) to be more easily digested intestine. Symptoms include nausea, vomiting, diarrhea, and other symptoms
Lowering Cholesterol
In contrast to cow's milk is high in saturated fat, soy milk fat mostly unsaturated and non cholesterol. Monounsaturated fatty acids and polyunsaturated in soy can inhibit the transport of cholesterol into the bloodstream. Research suggests that regular soy intake can significantly reduce levels of bad cholesterol in the blood.
Reduce the risk of heart disease
Protein and isoflavones present in soy, help in reducing LDL cholesterol and decrease the possibility of blood clots. This in turn, reduces the risk of heart disease and stroke. Research has shown that consumption of milk containing 25 grams of soy protein for nine weeks resulted in a decrease of 5% on average LDL cholesterol.
Preventing Osteoporosis
Not only cow's milk may reduce the risk of osteoporosis, soy milk can also provide the same benefits. Content of phytoestrogens in soy milk can help speed up the absorption of calcium by the body and prevent the loss of bone mass. To obtain maximum results, make sure you buy soy milk containing vitamin D.
Prevent Premature Aging (Anti-Aging)
For everyone; being old is a certainty that does not to be feared. Consuming food or beverage source of anti-oxidants is a wise choice, as well as the right choice to combat premature aging. Anti-oxidants are generally derived from a class of vitamins and minerals; including vitamins B, E, C, Beta-Carotene, Chromium, Selenium, Calcium, Copper, Magnesium, and isoflavones.
Beverages for Vegetarian
For vegetarians, soy milk can be served as a main drink. In addition to delicious and refreshing, nutritional value is not inferior to cow's milk. Soy milk is a beverage source of vitamins (B1, B2, B6, and provitamin A), source of minerals (Calcium, Magnesium, Selenium, Phosphorus), sources of carbohydrates, protein source and fat source).
Beverages for People with Autism
Autism sufferers should not eat foods that contain casein (milk protein) and glutein (protein powder). Because in addition to difficult to digest, foods that contain two types of protein can cause brain dysfunction. If consumed, the behavior of people with autism will be more hyperactive. Casein sources derived from animal milk (cow's milk) as well as a wide range of products, such as cheese and cream. For people with Autism, Cow Milk can be replaced with Soy Milk. Thus, people with autism still gaining input protein, vitamins, and minerals are sufficient. The most important thing of all, soy milk does not contain casein and glutein.

Soy milk has about the same amount of protein as cow's milk, though the amino acid profile differs. Natural soy milk contains little digestible calcium as it is bound to the bean's pulp, which is indigestible by humans. To counter this, many manufacturers enrich their products with calcium carbonate available to human digestion. Unlike cow's milk, it has little saturated fat and no cholesterol.

Soy products contain sucrose as the basic disaccharide, which breaks down into glucose and fructose. Since soy doesn't contain galactose, a product of lactose breakdown, soy-based infant formulas can safely replace breast milk in children with galactosemia. Like lactose-free cow's milk, soymilk contains no lactose, which makes it a good alternative for lactose-intolerant people. For patients without conditions that limit which sugars they can consume, there is no evidence to support any sugar-related health benefit or detriment to consuming soy milk instead of cow's milk.