Chamomile has many health benefits, especially for digestion. Chamomile can be used to treat abdominal pain, inflammation of the intestine, and as a sleeping pill (sedative). Moreover, it can be used to make herbal tea, by adding 2 tablespoons of dried chamomile flowers per cup of tea. To cope with abdominal pain (inflamed), it is recommended to drink a cup of chamomile tea every morning without breakfast for 2 or 3 months. 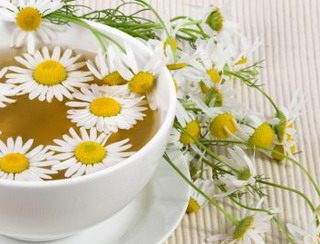 Chamomile is also used for cleaning the mouth to heal mukositis, a disease of the mucous membranes. The composition of the active substance of chamomile oil extract called bisabolol. Other active substances are chamazulene, flavonoids and coumarin. Anti-inflammatory in chamomile makes it good for rheumatism, arthritis, and other painful swellings. Relieve fever, sore throat, aches and pains due to colds, flu, and allergies.
Chamomile is a flowering plant in the sunflower family. This plant is believed to have originated from Europe and Asia. Chamomile require open land to grow, usually growing wild. Chamomile plants can grow as tall as 15 to 60 cm. The leaves are long and small groups of two or three leaves on one stalk. The flowers are similar to sunflower and mostly white.

Some people have serious allergic reactions (including anaphylaxis) to chamomile. If you are allergic to other plants in the same family such as daisy, ragweed, aster, chrysanthemum, or marigold you should use caution when using chamomile.
Chamomile should be avoided during pregnancy because it may act as a uterine stimulant and therefore increase the chance of abortion.
People with bleeding disorders or on blood thinners should avoid chamomile, as it contains coumarin and may increase the chance of bleeding.
Share this article :
Share on FB Tweet Share on G+ Submit to Digg
Newer Post Older Post Home