Home » Tips » How To Get Rid Of Breast Pain During Menstruation

How To Get Rid Of Breast Pain During Menstruation

Breast pain is a common complaint that is often experienced by women either constant or intermittent. This condition could actually be triggered by several factors. A woman may suffer from breast pain as a result of a multitude of reasons like breast disease, nursing, chest wall tenderness, injuries or even infections. Sometimes such pain has been known to manifest from the consumption of certain medication like lanoxin, anadrol or thorazine. 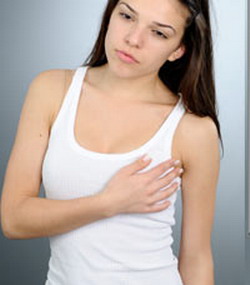 Needless to say that pain in the breasts should be taken seriously and a physician should be consulted at the earliest. However, it would be wise not to panic. Breast pain is an ailment that mostly distresses younger women who are still menstruating. Such pain is not seen very often in older women, especially those who have stopped menstruating. Sometimes the cause of breast pain is a simple imbalance in hormones.
The pain in the breast can be divided into two types: cyclic and noncyclic pain. Cyclic pain, usually associated with the menstrual cycle as hormones and harmless. While noncyclic breast pain usually comes from the breast itself or the surrounding area.

Here are some causes of breast pain that commonly occur in women:
Breast disease
This is the most common cause for a woman to experience breast pain. Breast disease is also known as fibrocystic changes or fibrocystic disease. A woman suffering from fibrocystic changes will experience pain in one or both breasts. A physical examination will reveal the existence of rubbery lumps known as fibroadenomas. The tissues that support the glands will also feel as though they are thickening. This kind of pain is seen most often in women during their reproductive years.
Pain Caused By Nursing
Many nursing mothers complain of pain while nursing their babies. Improper drainage can be one of the causes of pain, because, if the baby is not feeding properly, the milk accumulates in the breast and thus causes pain. Sometimes when a woman has an abundant supply of milk and nurses, the milk may come out faster than it normally would, thus causing pain. Sometimes mothers may lean over their child while breast feeding. This posture leads to physical stress in the mother’s body and may also lead to back aches and breast pain.
Pain During Menstruation
Hormonal imbalance is one of the most common causes of breast pain in a woman who is menstruating. The main cause of this type of pain is the imbalance in the levels of estrogen in the body. This imbalance leads to an increase in the size of the breasts, thus causing pain and discomfort.
Infections
The two most common infections that lead to breast pain are mastitis and thrush infection, both of which are commonly seen in nursing mothers. Mastitis is a bacterial infection that infects the breast duct through the cracked skin around the nipple of a nursing mother. This infection will cause the breast to swell up due to an increase in blood flow, look red and hurt. Thrush infection is a yeast infection that causes the mother pain during feeding. This pain is felt inside the breast and is accompanied by the nipple becoming red, flaked and itchy. Rashes may also appear around the nipple.

How To Get Rid of Breast Pain