Many health benefits of bean sprouts. Sprouts have always been in the list of healthy and nutritious foods. In addition to easy cooking, sprouts are also good for health. In fact, sprouts are also known as energy giving foods.
Bean Sprouts is a storehouse of nutrients. Bean sprouts contain vitamins B, C, B1, B6, K and A. In addition, sprouts are also a source of food rich in iron, magnesium, phosphorus, calcium, potassium, and manganese, and omega 3 fatty acids. Sprouts are a good source of enzymes and is needed by the body. This enzyme can increase the body's energy and make us feel fit and healthy. Sprouts contain much oxygen. It can increase blood flow in the body, kills bacteria, boost the immune system, and others. 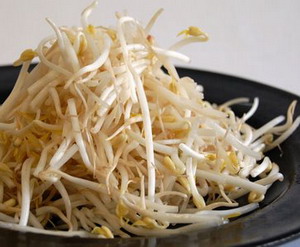 Some experts argue that better bean sprouts eaten raw, while its fluxing agent is still intact. Can be eaten as a salad, or drunk as juice. If cooked, preferably pan-fried or steamed briefly. Some argue that the sprouts should be cooked before consumption, It is meant for not exposed to the dangers of E coli, which allows contamination of vegetables and repackaging. But not for too long in cooking and should be immediately eaten to avoid loss of vitamins content.
If sprout to be boiled, for example made ​​vegetable soup, put the sprouts just before dishes removed. That way, vitamin C and enzymes that damaged estimated at only 20 percent. If boiled longer, the damage could reach at least 60 percent.

Seeing abundant nutritional substances, has been ascertained that the bean sprouts have a very good potential efficacy to maintain and promote health, and prevent various health problems.
Here are the benefits of bean sprouts to health:
Preventing cancer
In the process of beans become sprout, has outlined 90 percent olisakarida chain become simple carbohydrates, so that the compound is easily absorbed by the body, without producing gas. Because it contains a lot of fiber and water, sprouts help, draining impurities in the colon. It is become double power sprouts in the fight against cancer. By pushing dirt immediately left of the colon, so that no toxic substances in the dirt that can absorbed by the body. And this will prevent the buildup of toxic substances that can stimulate the blossoming of the seeds of cancer.
Antioxidants contained in it may help slow the aging process and prevent the spread of cancer cells.
Preventing heart attack and stroke
The people with the risk of stroke and heart attacks are caused by increased blood fat levels, it is recommended to eat more bean sprouts. This is due, in saponin sprouts will destroy LDL bad cholesterol without fat megganggu good HDL. And saponins that can be obtained in large alfalfa sprouts when the grain become sprout, which generally saponinnya levels up to 450%.
Preventing Osteoporosis
Natural estrogen found in sprouts can function similarly to the synthetic estrogen, but the superiority of natural estrogen has no side effects. So that the estrogen in bean sprouts can significantly increase bone density, bone structure and prevent the rottenness of the bones.
Generating the immune system
Saponin sprouts can also raise the body's immune system, in particular by increasing the activity of natural vascular cells (natural killer cells), particularly the T-cell lymphocytes and interferon. In addition to DNA-laden, bean sprouts are rich in antioxidants that fortify the body from free radicals, damaging cell DNA.
Good for Digestion
Because it is alkaline, the bean sprouts are very good to keep the acidity of the stomach and facilitate digestion. Besides fiber content can increase intestinal contractions, so as to have an effect that can facilitate defecation.
Increasing fertility
Bean sprouts have the ability to increase fertility, if consumed regularly it will improve the quality of sperm. The content of vitamin E, especially vitamin E-alpha, and might help to improve fertility for men. Vitamin E is an antioxidant that can protect cells from free radical attack. By eating the sprouts, there is the possibility of vitamin E is to protect egg cells or sperm of different damage from free radical attacks.
Good for the skin
Bean sprouts are also good for beauty, which helps rejuvenate and soften the skin. This is because the sprouts contain high levels of vitamin E are high. Vitamin E is an antioxidant that can protect cells from free radical attack. Sprouts, bean-based, is also believed that the major protein and essential for skin turnover.
Lose weight
Bean sprouts are also very free of fat, a cup of green bean sprouts, or about 124 grams contains only 0.11 grams of fat, so sprouts are a good source of food to lose weight. Low-fat diet with sprouts is very useful for weight loss. Besides a low-fat diet also reduces the risk of type 2 diabetes (due to lifestyle).
Prevent menstrual disorders and menopause
Antioxidant content in bean sprouts can improve blood circulation in order to prevent and neutralize the factors supporting the occurrence of the disease. If you regularly eat sprouts before menstruation may help prevent complaints during menstruation. Eating sprouts as a source of vitamin E also may help prevent disruption of heat that is felt in the pre menopause.
Other benefits
Eliminating black spots on the face, acne cure, nourish hair and prevent breast cancer.
Caution
In addition to that abundant nutritional content so it is very nutritious for health care, sprouts also have properties and substances that can be harmful to health, so need to be cautious when consuming sprouts.
Be careful for the stomach
However, the nature of mung bean sprouts are cool, if eat too much it will also easily damage the stomach (freezing). Therefore, for the conditions of the cold stomach it is not suitable when taking them for a long time. Can lead to acute colitis, severe gastroenteritis, and diarrhea, and for people with other diseases also can not eat too much. When cooked, should be mixed with a bit of chili, or cook with fragrant vegetables, chives and other similar vegetables, to counteract the cold properties it contains. Lupus patient should avoid the alfalfa sprout.
Breast cancer patients
For women with breast cancer that are undergoing treatment with tamoxifen therapy in order to limit the consumption of sprouts, much less raw. Phytoestrogen compounds in sprouts can reduce tamoxifen work. That is, the sprouts should only be limited if we suffer any kind of tumor or cancer associated with estrogen.
Note when buying
When buy it, should be kissed to ensure no unpleasant smell. If there is a smell, do not buy or eat.
Share this article :
Share on FB Tweet Share on G+ Submit to Digg
Newer Post Older Post Home