How To Get Rid Of Bruises With Natural Ways

You can use various methods to get rid of a bruise. Bruise is the body tissue injury, which causes the blood flow of the cardiovascular system settles in the surrounding tissues, and not accompanied by tearing of the skin layer. Usually caused by a blunt object collision. Bruise cause bluish or blackish skin. If there is bleeding in the bruises called a hematoma. 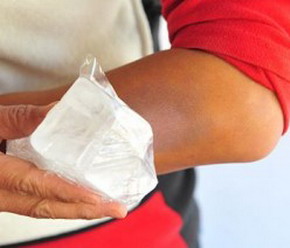 Bruise can cause pain but generally harmless. Bruise can sometimes lead to serious consequences, leading to something more threatening known as hematoma and may also be associated with other more serious injuries such as broken bones or internal bleeding. Small bruise easily recognized by the characteristic blue or purple a few days after the injury.
Pain in bruise usually mild to moderate and swelling that accompany are moderate to severe. Bruise that may occur is in the head, shoulders, elbows, hands, chest, abdomen and legs. Concussion on the head can lead to bruise and possible wound arise.

a. Bruising of the brain: concussions
When the human brain is hit very hard on the skull, it can become bruise. The process begins when the first bag of three brain protective bag is torn. Blood flows out of the brain and into the second bags. It happened like pudding wrap with 3 bags, and pudding was torn. So a lumpy pudding came out and trapped in the second bags. People who suffered a brain hemorrhage could pass out or lose consciousness in a long time.
b. Bruise on the skin
This is the most common. A patch of skin the size of a postage stamp could be overwhelmed by the small blood vessels of about one meter long. When the blood vessels collided, they broke and blood dripping into the bottom layers of skin. The top layer of skin has absolutely no blood vessels. It serve to keep the blood not to leak out. If blood gets out, the name is wound. Sometimes wounds can also surrounded by a bruise.
c. Bruised eyes: Eyes Panda or periorbital ecchymosis
Eye itself is not actually turn out to be purple or blue, just the skin around the eyes that is changing color. Sometimes small blood vessels in the eye can rupture and make eyes became red.
d. Nail Bruised: Subungual Hematoma
For example, when your hand wedged the door or hit with a hammer. Nail itself is not bruise, that is the skin bleed under the nail. The problem with bruise is the pressure, the pressure causes pain.

Here are some things that can cause bruise:

Tips To Get Rid Of Bruise

1. To speed up the healing process (bruising of the skin), pack ice is one effective way on the first day. Ice pack can you paste it directly into the skin.
2. Vitamin K cream or arnica cream can help relieve bruise faster. Despite a bruise on the lower body (eg: feet) is usually slower to heal than bruise on the arm.
3. Bandage bruised foot with an elastic bandage to stop bleeding more quickly, so do not be too severe.
4. To bruise on nail, this way, is rarely used, that is by removing the pressure from under nail. Usually the doctor will use a hot needle to make a small hole in the bottom of nail, so that blood can flow out. However, this method should not be tried for those that wear fake nails, because the heat of the needle can make fake nail burned.
5. Elevate the bruised area. Reduce blood flow to the area with gravity's help. Lifting the bruised area so that it's above your heart will prevent blood from pooling in the bruised area, and reduce discoloration. if the bruise is on your leg, settle onto the couch and rest your leg on top of a few pillows. If your arm is bruised, try to prop it up on an armrest or a few pillows, so that it's at heart-level or above.

Home Remedies To Get rid of Bruises