Black Cumin Nutrition Fact And Health Benefits You Must Know

There are many health benefits of black cumin. Black cumin (nigella sativa) is used as a herbal medicine from 2000-3000 BC, was found in the tomb of Tutankhamen, this suggests that in ancient Egypt the black cumin is used in the treatment. Ancient Greek physicians, Dioscoredes, in the first century AD have also noted the benefits of black cumin to treat headaches and respiratory tract, toothache, and intestinal worms. 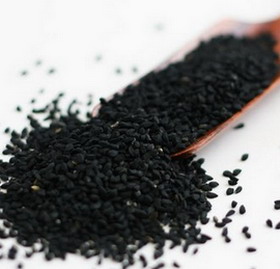 Black cumin is very effective in helping the healing of various diseases and maintain a healthy body. The elements in it works on the body without disturbing the balance of nature, so it does not cause side effects. In addition, the benefits of black cumin is not only cure the disease but it also helps the body to form resistance to disease and other disorders in the future.

In the black cumin contains high nutritional value such as a monosaccharide (single sugar molecules) in the form of glucose, rhamnose, xylose and arabinose. It also contains a non-starch polysaccharide component which is a useful source of dietary fiber. Rich in fatty acids, particularly the unsaturated and essential fatty acids (linoleic and linolenic acids).
With the content of linoleic acid (omega 6) and linolenic acid (Omega 3), black cumin is nutrition for the brain cells that are useful to improve memory, intelligence, and the relativity of brain cells that do not go senile. Black cumin also improve micro (blood circulation) to the brain and is suitable given to children age and growth of the elderly
Fifteen protein-building amino acids from black cumin, including eight of the nine essential amino acids. Essential amino acids can not be synthesized within our body in sufficient amounts. Black cumin contains arginine which is important for the developing baby. Chemical analysis further revealed that black cumin contains carotene, which is converted by the liver into vitamin A. It is also a source of calcium, iron, sodium, and potassium.
Black cumin has compounds such as ascorbic acid, quercetin and luteolin. Ascorbic acid has antioxidant qualities, which means eliminating free radicals, and studies have shown it can boost the immune system and can prevent stroke, cancer and heart attacks, strengthen and stabilize blood vessels. Some carboxylic acids contained in black cumin has the potential to inhibit liver damage.
Black cumin was believed to treat ailments including bronchial asthma and bronchitis, rheumatism and related inflammatory diseases, is also efficacious to increase milk production in nursing mothers, to treat digestive disturbances, to support the immune system, to improve digestion and elimination, and to fight parasite attack. Oil of black cumin has been used to treat skin conditions such as eczema and boils and is used topically to treat cold symptoms.

Black cumin widely used by herbalists as a cure some diseases. Here are some health benefits of black cumin:
1. Sources of nutrition
Black cumin contains beta-carotene (pro-vitamin A), calcium, iron, sodium and potassium. Although needed in very small amounts by the body, these elements serve as cofactors in various enzyme functions. Black cumin also has eight of the nine essential amino acids. Essential amino acids can not be synthesized in our bodies that need to be taken outside.
For nutritional supplement, you can take half a teaspoon of Black Seed oil or extract three times a day.
2. Boost the immune system.
Black cumin can boost immunity, especially in patients with impaired immune systems. According to research, 1 gram Seed capsules, twice daily for four weeks can improve T-cell ratio between positive and negative up to 72%. Increased immunity plays an important role in the healing of colds, influenza, AIDS, and other diseases related to the immune system.
3. Cure asthma and allergies
Histamine is a substance released by the body's immune system as an allergic reaction. Crystalline nigellone on black cumin has a protein kinase C, a substance known to inhibit the release of histamine. Giving black cumin can reduce allergic reactions in most patients with bronchitis asthma and other allergic diseases with no side effects.
For the treatment of asthma and allergies, take a cup of warm water, one tablespoon of honey and half a teaspoon of black cumin oil or extract. Mix and drink in the morning before breakfast and after dinner. During treatment, avoid cold foods and allergens.
4. Treating cancer
Fatty acids in black cumin can inhibit cancer development. Black cumin stimulate productivity and bone marrow cell immunity and interferon production, protects normal cells against cell destroying viruses and against tumor cells without damaging healthy cells.
For cancer treatment, mix one glass grape juice and half a teaspoon of Black Seed Oil. Drink three times a day. Treatment may last for forty days. In addition, you can also rub the black cumin oil on the affected cancer for two weeks.
5. Medicine for digestive disorders
Black cumin is effective against bacteria, including bacteria known highly resistant to drugs, such as cholera bacterium, E. coli, and Shigella spp. Therefore, black cumin can be used to treat disorders of the digestive system caused by bacterial infection and other causes of non-specific symptoms such as stomach pains, dyspepsia, diarrhea and vomiting.
To treat indigestion, take half a teaspoon of oil or black cumin extracts were mixed with a cup of milk. Drink the mixture twice a day. Alternatively, you can also mix one teaspoon of ginger powder and half a teaspoon of Black Seed oil or extract.
6. Treating inflammation
Thymoquinine on black cumin is an effective anti-inflammatory drugs. You can use black cumin oil as an ointment on the inflamed acne. To prevent acne and smooth the skin, take one tablespoon of olive oil and mix with half a teaspoon of black cumin oil. Rub on the face and wash the face with soap water after an hour later.
For the treatment of inflammation in the ankle and other joints, take one tablespoon of vinegar, two tablespoons of honey and half a teaspoon of black cumin oil. Use this mixture twice a day to massage the inflamed part.
7. Increasing the amount of breast milk
Seed can increase the amount of milk in nursing mothers due to the combination of the elements and structure of lipid hormones contained therein. In addition, black cumin also contains arginine which is important for the growth of infants. Not much is known about the safety of using black seed during breast-feeding. Stay on the safe side and avoid use.

Black cumin seems to be safe in food amounts during pregnancy. But taking larger medicinal amounts is unsafe. Black cumin can slow down or stop the uterus from contracting.