Apples have a variety of health benefits. In apples, contains many vitamins such as vitamin A, B1, B2, B3, B5, B6, and vitamin C. There are also a number of minerals such as potassium, magnesium, calcium, iron, zinc. Other elements such as fitokimian, tannins, fiber, baron, tartar acid is also contained in apples. 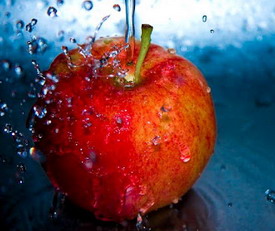 With the vitamins, minerals and other elements in the apple, making it classified as a medicinal plant, and can provide a number of health benefits. According to the study, apples may reduce the risk of colon cancer, prostate cancer, and lung cancer. Compared with other fruits and vegetables, apples rich in antioxidant compounds.

1. Reduce risk of cancer
Flavonoids such as quercetin present in apples maintain oxygen molecules from damaging individual cells. It can prevent cell changes that can lead to the development of cancer cells.
According to a study involving 10,000 people, those who ate apples had a 50% lower risk of developing cancer of the lungs. In another study, apples can reduce the risk of breast cancer by 17 percent and colon cancer by 43 percent. Reducing the risk of cancer associated with the pectin in apples (acting as fiber), which helps regulate bowel movements and maintain a healthy digestive tract.
2. Reducing LDL cholesterol
Apples are a good source of pectin which helps in reducing LDL cholesterol levels. Pectin binds cholesterol and fats before the body absorbs them. Polyphenols found in apples also been shown to lower cholesterol. By eating 2 apples per day, you can lower cholesterol by 10 percent.
3. Reduce the risk of cardiovascular disease (Heart, Stroke)
Quercetin is found in apples has been shown to protect against heart disease. A study of 40,000 women found that those who ate apples had a 13-22% lower risk of cardiovascular diseases such as heart disease and stroke than those who did not.
4. Reduce the risk of diabetes
Pectin in apples channel galacturonic acid to the body which lowers the body's need for insulin and helps in the management of diabetes. A study found that women who ate at least one apple a day are 28% less likely to type 2 diabetes than those who did not eat apples.
5. Helps Digestion Process
Apples are rich in fiber are known to help the digestive process. Fiber and apple skin is considered the best remedy for constipation.
6. Maintaining Dental Health
The fiber in the apple cleaning teeth, while anti virus apple guard from bacteria and viruses. Chewing apples also stimulate saliva production in the mouth, which helps in reducing tooth decay by reducing the number of bacteria.
7. Strengthen Bones
Apples contain flavonoids called phloridzin, is known to protect post-menopausal women from osteoporosis and increase bone density. Apples also contain boron which helps strengthen bones.
8. Boost the Immune System
Soluble fiber such as pectin in apples may reduce inflammation and improve the immune system. According to the study, soluble fiber may alter the immune cells by increasing the production of anti-inflammatory protein, interleukin 4.
9. Helps Weight Loss
Apples are low in calories. The average size apple has only about 80 calories, which means it has a relatively high water content of the calorie content. It is possible to have a sense of fullness / satiety while taking fewer calories.
10. Reducing the Risk of Alzheimer's Disease
A study found that eating apples and drinking apple juice could improve brain health and reduce the risk of Alzheimer's disease. According to one study, quercetin in apples may protect brain cells from free radical damage that can lead to Alzheimer's disease.
11. Reduce Risk of Parkinson's Disease
A recent study found that eating an apple a day supply of phytochemicals, which play an important role in reducing the risk of Parkinson's disease, a chronic progressive disorder of the central nervous system characterized by the function of neurons in the brain.
12. Maintaining Hair Growth
A study in Japan showed that procyanidin B2 in apples can increase hair growth.
13. Reduce Asthma
A British study reported that children born to mothers who ate apples during pregnancy, tend to avoid the symptoms of asthma than children whose mothers ate few apples. Another study from Australia reported that participants who ate apples and pears had the lowest risk of developing asthma.
14. Protect against cataracts and macular degeneration
Apples contain large amounts of both vitamin A and vitamin C, which helps prevent age-related macular degeneration and protect against cataracts.
15. Curing Anemia
Apples are also rich in iron are effective for the treatment of anemia. After two or three apples a day can help the body maintain its iron levels.
Share this article :
Share on FB Tweet Share on G+ Submit to Digg
Newer Post Older Post Home